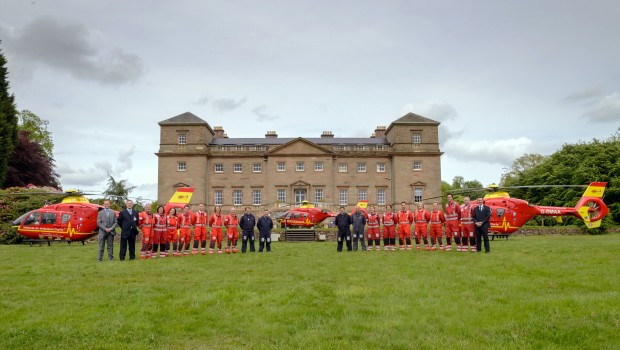 Hagley Hall was proud to support Air 25 last month which was held to celebrate the 25th Anniversary of the Midlands Air Ambulance Charity’s inception. The Garden Party was sponsored by the charity’s corporate partner, Pertemps, and hosted by radio and TV broadcaster Michael Collie, was both a celebration of the last 25 years of the life saving work of the air ambulance charity and a thank you to the people who have made a significant difference to the organisation.

The Countess of Wessex graciously accepted the invitation after learning of the Midlands Air Ambulance Charity’s vitally important work in the region, and upon learning that the organisation has undertaken over 46,000 missions since its conception as ‘Air5 in 1991.

Her Royal Highness has been a strong advocate of the lifesaving work of the air ambulance. During her speech at the event The Countess attested to the work of the charity revealing that she had herself been airlifted by an air ambulance and understood first hand the valuable work of the service.

Helen Stevens, Communications Manager at MAA reported that the day was a huge success.

“We couldn’t have asked for more from the whole team at Hagley Hall. They went out of their way to ensure Midlands Air Ambulance Charity’s Air25 25th anniversary Garden Party ran smoothly and that all our guests were well looked after. We are extremely grateful to everyone at Hagley Hall for their professionalism, attention to detail and support of our charity”