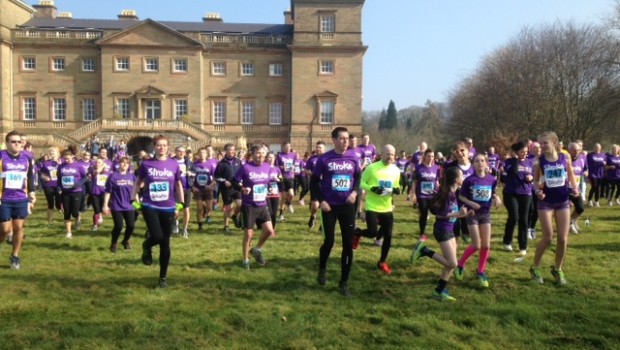 Hundreds of runners from across the region ran, jogged and walked across the picturesque Hagley Hall parkland last weekend all for the good of the Stroke Association. On Sunday a sea of purple fundraisers took to the challenging course that had been painstakingly plotted by Lord Cobham himself with the help of Joe Hawkins, our Head of Landscaping, to complete either a 5km or 10km course during the Resolution Run event.

More than 400 people took part in the run and raised thousands of pounds towards the vital work done by the charity to help conquer stroke. Katrin Winstanley, Events Manager at the Stroke Association, said:

"We're extremely grateful to everyone who took part - it was a fantastic turn out and a great day for everyone involved.

"The money raised on the day will fund vital research and support, as well as help to prevent people from having a stroke."

Feedback from the event has been fabulous and the folk that attended said that it was well organised with friendly staff, marshals and runners alike!

However one of our staff manning the tea tent overheard a runner say that "the course was more than challenging - it was lung-crushing" !

Better get those trainers on and get back in training for next year's Hagley Hall Fun Run!